This Is Anfield
This Is Anfield
It was victories all around for Liverpool Football Club over the weekend with the men’s, under-18s and the women’s side all putting a win on the board respectively.
Jurgen Klopp‘s side kicked off the weekend with a gritty 1-0 win over Aston Villa before two FA Cup fixtures followed with resounding victories the way of the Reds.
The first came in the FA Youth Cup with Marc Bridge-Wilkinson’s young Reds dispatching Fleetwood Town in a 4-0 win, with the impressive Mateusz Musialowski netting a hat-trick.
And that result was then matched by Matt Beard’s side on Sunday in their opening FA Cup game of the season, with Burnley downed 4-0 to complete the trifecta of victories across all levels.
After a 22-day break, Liverpool Women were back in action and picked up from where they left off to reach the fourth round of the Vitality Women’s FA Cup.
Melissa Lawley, Rachel Furness and Niamh Fahey were responsible for the goals, with the first arriving after Burnley‘s ‘keeper mishandled Lawley’s inswinging corner delivery. 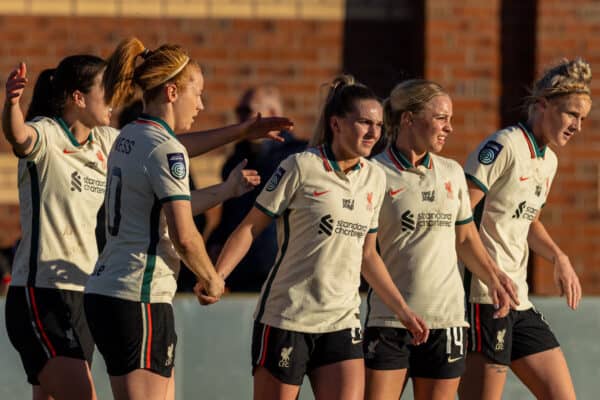 Furness then added the second of the afternoon after cooly chesting the ball down and pulling the shot across the ‘keeper.
The final two then had the markings of Lawley with the third goal arriving off Fahey from another dangerous and chaotic corner delivery from the No. 11, who then got on the scoresheet herself with a simple close-range finish.
The win not only takes Liverpool Women to the next round of the FA Cup but also ensures their unbeaten run stretches to 13 games, with their last defeat coming in the first matchday back in August.
And it’ll be another cup game to make it 14 without defeat for the Women’s side with Sunderland awaiting in the final group game of the League Cup on Wednesday.
Klopp’s side have seven wins in a row and the Beard’s unbeaten in 13, Liverpool Football Club is delivering the goods. Now for more!
Liverpool Women: Laws, Roberts (Wardlaw, 45), Robe (Moore, 45), Fahey, Matthews (Campbell 62′), Hinds, Holland (Kearns 45′), Furness, Lawley, Daniels, Hodson
Subs not used: Clarke, Humphrey, Parry, Walters
Don’t miss a moment of This Is Anfield with our newsletters. Learn more.
Having problems subscribing?
About      Advertising     Contact     Privacy     Terms